Original article published on 1st May 2019 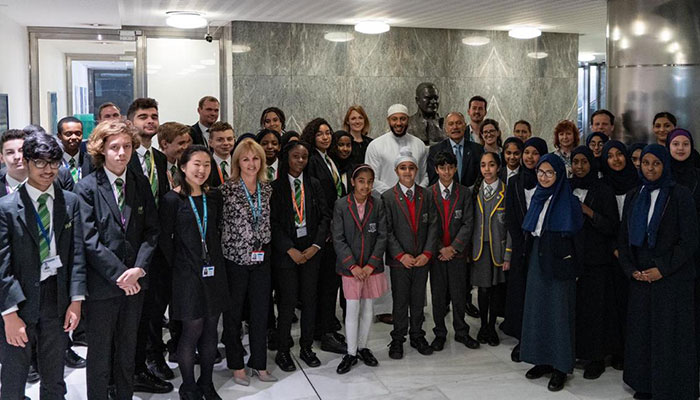 LONDON: British Muslims led by Imam Mohamed Mahmoud including dozens of school children from all faiths paid a visit to the New Zealand High Commissioner to give their condolences in the aftermath of the Christchurch terrorist attacks last month.

The visit included a minute silence, presentations of flowers and the reading of the names of all the young people who were killed in the mosques during Friday prayers in Christchurch. The attack, which sent shockwaves throughout the Muslim world, brought widespread condemnation from a variety of UK faith and political leaders.

After a private meeting with the New Zealand High Commissioner Imam Mahmoud said, “After visiting the victims and survivors of the terrorist attack in Christchurch, I was overcome by the dignity and patience with which they conducted themselves in the aftermath. I was also impressed with the manner in which the New Zealand government and officials responded – deciding to further embrace their Muslim community and not letting division and hatred win.”

The visit organised by Naz Legacy Foundation follows from their interfaith faith event with the Chief Rabbi and the Archbishop of Canterbury held at the Regent Park Mosque’s Islamic Cultural Centre two days after the attack. They were joined by over 250 leading faith and civil society leaders as well the Home Secretary Sajid Javid and Communities Secretary James Brokenshire who both reiterated the government’s support for the British Muslim community, and security funding for mosques across the country.

Speaking to The News, Harris Bokhari the organiser of the visit and event said that the memorial served as a “message to the terrorist who sought to sow division in society and spread fear that he has failed; as that which unites us is far greater than what divides.”

This vigil and event was not the first of its kind orchestrated by Bokhari who is one of UK’s leading grassroots experts in Countering Violent Extremism (CVE). He has in the past brought together politicians and faith leaders to unite British communities after attacks, most notably Nick Clegg the then Deputy Prime Minister in 2013 following the tragic murder of Drummer Lee Rigby in Woolwich.

Bokhari’s efforts in CVE were recognised by the US Embassy in 2017, in which he was one of only seven people and only British born Muslim, including Home Office officials and de-radicalism experts, selected to attend their International Visitor Leadership Programme on CVE.

Bokhari said, “It is important each one of us take an active role, in bringing together our communities, speak and act out against the hate and highlight that we have more in common.”