Original article published on 10th May 2019 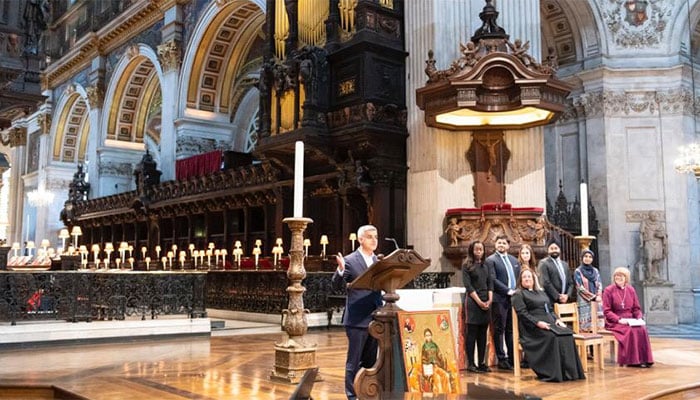 LONDON: London Mayor Sadiq Khan said on Friday that Pakistan faces major challenges like many other Islamic countries, but there are opportunities and hopes of improvement and progress through correct policies.

In an interview with Geo here at the St Pauls’ Cathedral, London Mayor Sadiq Khan commented that the month of Ramzan teaches compassion and charity for others and this message can be utilised to alleviate common people who face hardships.

One of the world’s most iconic places of worship, St Pauls’ Cathedral hosted its first ever iftar for Muslims and also invited members of other faiths to open fast with Muslims. The Naz Legacy Foundation together with St Paul’s Cathedral and the City of London Corporation had organised the interfaith iftar.

London Mayor Sadiq Khan said when he was fasting in his youth days, his friends used to ask him how he could survive without drinking water but now greater awareness exists about Ramzan. He said: “We should redouble our efforts in Ramzan to make sure we end inequalities. It’s important we remain optimistic.”

He added: “There is no place like London in this world. It’s the city that got a Muslim elected as its mayor. It brings together everyone irrespective of their creed, colour and ideology. The iftar at this iconic place is a demonstration of London’s togetherness and greatness. I am proud that we are celebrating our diversity.”

For the past four years, Harris Bokhari, co-founder of the Naz Legacy Foundation, has used his close friendships with some of the UK’s leading faith leaders, including the Church of England, to organise ground breaking iftars in the some of the most important places of worship in London; including Lambeth Palace, Archbishop’s House and St John Wood’s Synagogue.

The Bishop of London said: “What this has demonstrated is that everyone is welcome – people of all faiths and no faith – because that’s London. There is no more important time than now for people of all backgrounds to come together to rejoice at what we have in common, but also celebrate our differences. It is the powerful combination of diversity and unity that helps us thrive and benefit one another.”

The Bishop of London and London Mayor Sadiq Khan both gave speeches at the event and afterwards met young people to hear the challenges they are facing in London and how they think their political and faith leaders can tackle these problems. After opening fast with dates and water under the dome of St Paul’s Cathedral, the young people, together with members of the City of London Corporation shared a meal together at the Guildhall.

Speaking to Geo News, Bokhari said: “Sharing food together is one of the greatest ways to bring people of different backgrounds together. From a young age I have always enjoyed kosher salt beef sandwiches and latkes from Blooms or Reubens, iconic London eateries, and more recently the mouthwatering vegetarian food from Shayonas, Neasden Temple. Bringing young people of different faiths together to share iftar together this Ramadan again shows the beauty of food, and the role it plays in bringing our diverse communities together.”

Following the initial celebration in St Paul’s, the group moved to join the Chief Rabbi and enjoyed an iftar meal in the nearby Guildhall.

During the event, the young attendees discussed ways to celebrate diversity and bring communities together. They spoke of the importance of understanding other people’s traditions, and the sense of empowerment brought about by attending such a gathering in St Paul’s.